Today is Superman's 70th birthday according to E. Nelson Bridwell. I will answer a few questions posted by Brian Cronin in honor of Superman’s birthday:

1. What is your first memory involving Superman?

A Superman comic book was one of the first comic books that I ever received for the first time when I got my tonsils out.

2. What was the first Superman comic book you read?

I really don't remember but it had to be in the early 1970s. Sadly, I don't have the majority of comic books that I had when I was a kid. At the time, I didn't keep a list of my comic collection.

3. What is your FAVORITE Superman story, whether it be comic, movie, TV series or cartoon?

My favorite Superman story was "Superman 2001" featured in Superman. I actually had to give up my original copy but I remembered the story vividly. I did manage to find another copy in a comic book store several years later.

4. When you think of Superman, which artist’s take on him do you normally see in your head? Shuster? Boring? Plastino? Swan? Adams? Byrne? Jurgens?

I always think of Curt Swan's Superman from the 1970s since that is when I was getting comics almost every week.

5. Which of the actors who have played Superman did you like the best as Superman?

I would have to say Christopher Reeve is my favorite Superman actor for he really did make me believe that a man can fly.

Justice League: The New Frontier is set in the 1950s when America was dealing with the Korean War, the McCarthy hearings and rise of the Civil Rights Movement. Wonder Woman speaks of the horrors of war to Superman in 1952 in a village in Indo-China where only the women survived. Hal Jordan is shown as a jet pilot on July 27, 1953, which is the day that the Korean War ended. One of the headlines at the beginning of the animated movie states that Washington declared war on the mystery men. Later, there is a report on the mob beating of a black man named John Wilson. The title itself is from John F. Kennedy’s acceptance speech to the Democratic National Convention in 1960.

While Superman, Batman and Wonder Woman appear throughout Justice League: The New Frontier, the animated movie is more about the Hal Jordan, Martian Manhunter and the Flash. After the Korean War, Hal becomes a test pilot for Carol Ferris. The Martian Manhunter arrives on earth and becomes a plainclothes policeman. Barry Allen dons his Flash uniform and runs from Central City to Las Vegas after hearing the attack of Captain Cold while talking to Iris West on the telephone. Other characters in the DC Universe that appear are Ace Morgan from Challengers of the Unknown (the graphic novel by Darwyn Cooke has more with them), King Faraday, Rick Flag, Lois Lane, Jimmy Olsen, Robin, Green Arrow, the Blackhawks, Adam Strange, Aquaman and Ray Palmer before he becomes the Atom.

I won’t bore you with a scene by scene description of Justice League: The New Frontier because I want you to enjoy some of the same surprises that I did. Those who have read the six-issue mini-series, DC: The New Frontier will know the basics anyway. The animated movie has tons of surprises that a DC Comics fan like me will enjoy. One of my favorite surprises is Batman’s costume change and the explanation for it. The basic plot is about an alien threat and the mystery men team up to combat. Part of the movie’s fun is when the Martian Manhunter and Batman finds that a mysterious force is growing stronger.

Fans of the Justice League animated series may be disappointed by Justice League: The New Frontier and the “retro” look. However, fans that still remember Hal Jordan and Barry Allen in their early days will greatly enjoy this animated movie. I watched the widescreen version that lasted for seventy-five minutes. The bonus features included Super Heroes United: The Complete Justice League History, an exclusive sneak peak at DC Universe’s Batman Gotham Knight, an audio commentary featuring the filmmakers of the animated movie (Bruce Timm among others) and an audio commentary featuring Darwyn Cooke. I greatly enjoyed watching Justice League: The New Frontier and the feature is now one of my favorite animated movies.

A special thank you for the person that sent me the DVD to review.

I took pictures of the front and back. The message on the front reads "Here she comes! If she doesn't notice me in briefs, tights, and a cape, I give up!", the inside message reads "Have a Valentine's Day that's anything but mild-mannered!" and the back message reads "Chicks dig the cape!"

Another neat feature is that the Superman Returns Valentine card can stand up by itself. 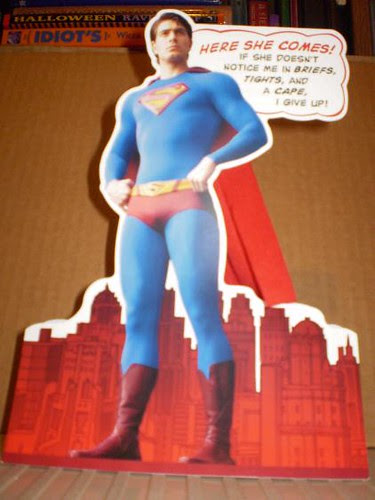 Back of Superman Returns Valentine Card 2008: 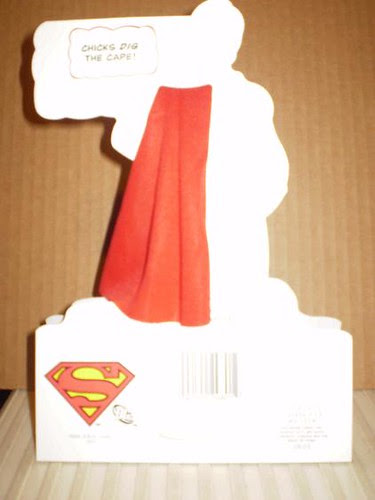 Posted by Jamdin at 1:04 PM No comments:

I can't wait until February 26, 2008 for that is the day when Justice League: The New Frontier will be released on DVD. The animated movie is inspired by the Darwyn Cooke's best-selling six-issue mini-series, DC: The New Frontier. Bruce Timm, the award-winning legend, is the producer. Voices include David Boreanaz, Brooke Shields, Lucy Lawless, Neil Patrick Harris, Miguel Ferrer, Kyra Sedgwick, Jeremy Sisto and Kyle MacLachlan

Justice League: The New Frontier tells the founding story of the super-hero team that includes Superman, Batman, Wonder Woman, Green Lantern, Martian Manhunter and the Flash. Other characters from the DC Universe that will also appear include Aquaman, the Blackhawks, Green Arrow, Adam Strange and the Challenger of the Unknown. They face a menace that even Superman can't stop alone.

You can view the trailer for the Justice League: The New Frontier at the official website. The site also has synopsis, videos, gallery and downloads. You can also enter in a sweepstake to be featured in a future animated DC Universe movie.

The following are scenes from Justice League: The New Frontier:

The Flash from Justice League: The New Frontier
Posted by Jamdin at 10:24 PM No comments:

The following video talks about the upcoming anime movie, Batman: Gotham Knight, which will be out on DVD this summer:

Posted by Jamdin at 2:37 PM No comments:

Steve Gerber, who created Howard the Duck for Marvel Comics, passed away on Sunday, February 10, 2007 at the age of 60 according to Newsarama. Recently, he created Hard Time and wrote a self-contained Dr. Fate story in the Countdown To Mystery mini-series for DC Comics.
Posted by Jamdin at 10:40 PM No comments: