DC vs Vampires: Killers #1 is a one-shot issue that hits the stands today and features Harley Quinn. 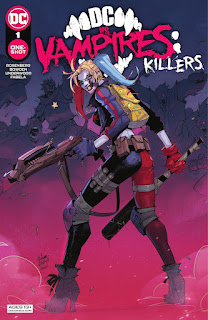 Dynamite Entertainment released Elvira in Horrorland #2 today and it spoofs The Shining (the first issue spoofed Psycho). Here are the cover gallery from the first two issues: 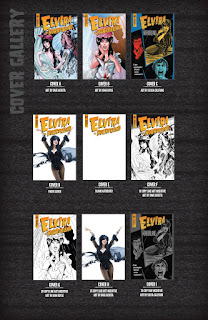 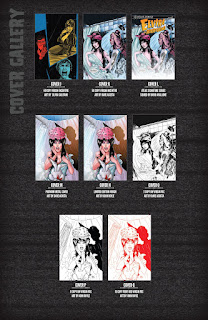 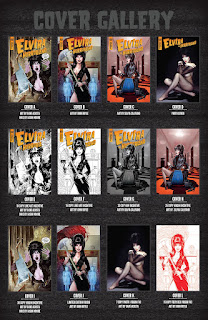 The comic book world has lost another great for Legendary Comic Artist Tim Sale Has Died. 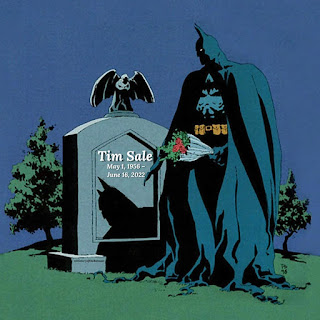 Ghost/Batgirl is a four-issue mini series from 200 from Dark Horse and DC Comics. The two women butt heads with Malcom Greymater and Two-Face. This Batgirl is the Cassandra Cain version in case you keeping score. Oracle also shows up to help out. 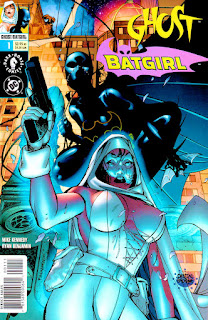 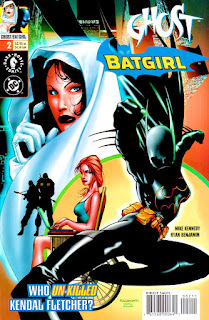 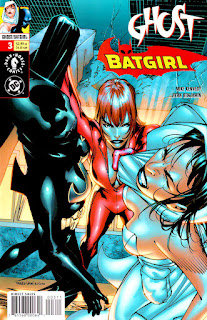 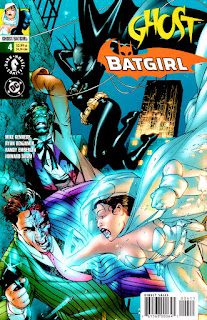 Black Adam #1 will hit comic stores on June 21, 2022 and this is the ad that is found in this week's comic books from DC Comics: 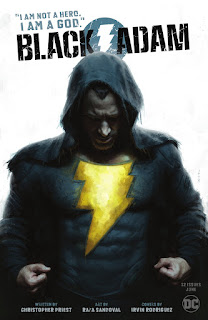 Here is the official Black Adam movie trailer at YouTube:

The movie stars Dwayne "The Rock" Johnson as Black Adam, Sarah Shahi as Isis, Pierce Brosnan as Dr. Fate, Noah Centineo as Atom Smasher, Aldis Hodge as Hawkman and Quintessa Swindell as Cyclone. Black Adam is set to be released to theaters on October 20, 2022.

DC Comics released Poison Ivy #1 today and it is an ongoing series: 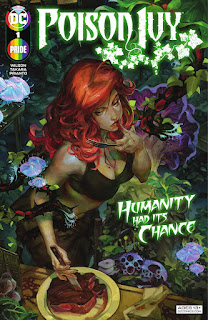 Justice League: Road To Dark Crisis #1 came out from DC Comics last Wednesday. The cover features shattered glass with shards showing Pariah, Darkseid, Flash, Hal Jordan aka Green Lantern, Jackson Hyde as Aquaman, Jonathan Kent aka Superman and Nightwing. The issue actually has multiple stories that deal with the aftermath of the death of the Justice League (all but one died anyway). The first story is about Nightwing and Jonathan Kent, who I still have a hard time accepting as Superman. The second story features Flash (Wally West) and Kid Flash (Wallace "Ace" West) that takes down Giganta and then tries to see who can stop the most crime. The next story features Green Lantern (Hal Jordan) following a space creature to Atlantis where he meets and teams up with Aqualad now known as Aquaman (Jackson Hyde). The story featuring Pariah has him being haunted by the memories of his dead wife, daughter and son before committing himself to building a machine to defeat the Great Darkness. Finally, Batgirl (Stephanie Brown) tries to stop Nocturna but ends up talking with her (Firefly shows up afterwards to offer the vampire a spot on the new Secret Society). The stories are not bad but not great either and they mostly feel like filler. I'm a little miffed that Kid Flash, Batgirl and Nocturna were not on the cover especially since Darkseid is not actually seen in any of the stories within the issue. 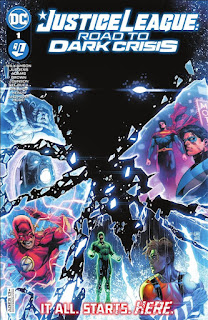 I picked up a copy of the Valentine: The Dark Avenger DVD a few weeks ago at the local Dollar Tree but I didn't watch it until Memorial Day. Estelle Linden stars as Srimaya, a waitress, who is hired by director Bono (Matthew Settle) to star in his new movie as the superheroine known as Valentine. Unfortunately, she gets caught up fighting the terrorist known as Shadow, who looks like he should be in a G.I. Joe movie. This is an Indonesian movie that was originally released as Valentine in 2016 and is based on the character from Skylar Comics. The movie was released with a new name in the United States in 2017. It's a low budget movie but the fight scenes and story is better than expected. 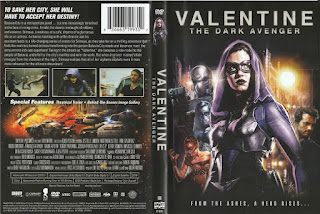 My favorite moment in Valentine: The Dark Avenger is when she fights a trio of supervillainesses, who works for Shadow. One of them sports a yellow wig, a black tutu and a top with a very familiar bat symbol.

I picked up a small selfie light ring at the local Dollar Tree a few days ago. It's supposed to clip on a cell phone but I decided to test it out with my Olympus FE-170 digital camera (I really need to get a newer one someday). I couldn't clip the light ring on the camera but I was still able to use it. I decided to take some pictures of my old Spider-Man parachute figure from 1978. I have lost the actual parachute way back when and a lot of the paint has rubbed off. The pictures were brighter and wasn't as yellow as they usually are thanks to the bare lightbulb in my ceiling light. I still had to use GIMP to edit the contrast and brightness levels otherwise the red and blue would be dull. I need to get a different photo editor someday too because GIMP exports instead of save jpgs, which is rather annoying. 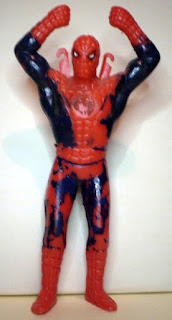 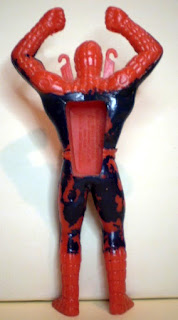 Back of Spider-Man 1978 Parachute Figure

Posted by Jamdin at 12:05 AM No comments:
Email ThisBlogThis!Share to TwitterShare to FacebookShare to Pinterest
Labels: collectibles, figures, marvel, spiderman, toys

Captain Carter #3 from Marvel Comics comes out today so I thought I would post the first three covers of the series by Jamie McKelvie. 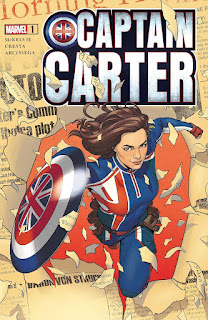 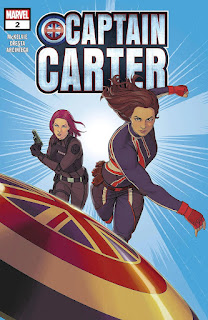 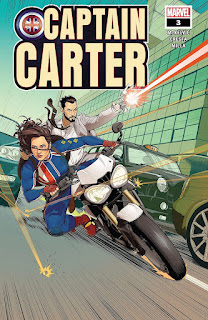 I received an email from Spotify with the fallowing ad for Batman Unburied: 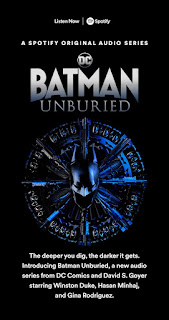 About Batman Unburied: "A serial killer known as The Harvester terrorizes Gotham City, but Batman is not coming to the rescue. In fact, Bruce Way has no memory of being the Caped Crusader at all. Instead, Bruce is a forensic pathologist, performing the autopsy on the latest victim when he's attacked by the killer himself. As Bruce's obsession with the Harvester consumes him, Dr. Thomas Wayne, head of Gotham City Hospital, orders his son to take medical leave and seek treatment from an unusual psychologist, Dr. Hunter. With Batman missing in action, Detective Barbara Gordon is left with no other choice but to seek help from Gotham's second smartest detective: The Riddler." 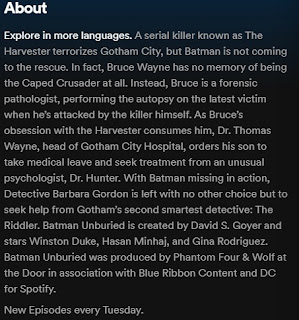 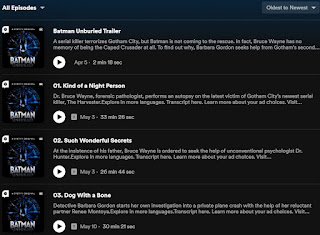 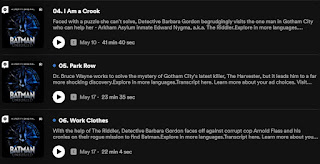 I decided to listen today as I write this post. I'm on the second episode now and it's pretty good so check it out if you have Spotify (if you don't, then you better get it).

I missed Marvel's X-Men Red #1 last month but Storm plays a major part in the series. The second issue came out today and the series is basically about what happens after the X-men terraform Mars. The first issue's cover features Storm, Magneto and Sunspot while the second issue's cover features Storm and Vulcan. The first issue also features a hot shot of Storm on page 34. Appologies for having the images reversed for somehow I lost the ability to copy and paste the code while editing the html. 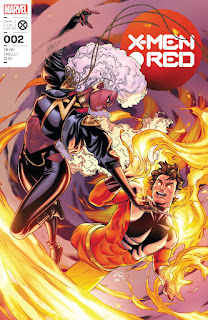 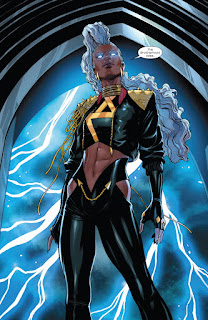 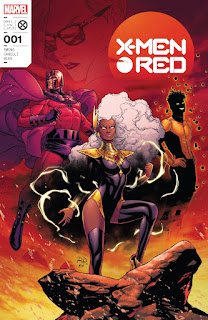 Must Have For Elvira Fans:

Click here to purchase Yours Cruelly, Elvira: Memoirs of the Mistress of the Dark hardcover book at Amazon!