I found this ten inch Batman from the Justice League series at a local thrift store for a dollar eariler. I now have Superman, Martian Manhunter and Green Lantern. 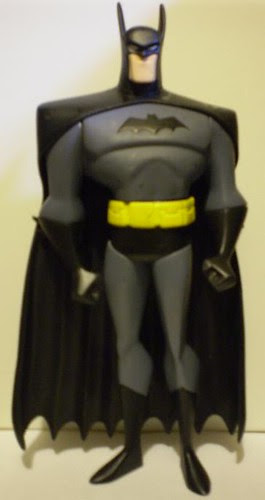 Where do I start by saying how cool Jon's Random Acts of Geekness is? I have been wanting to write a piece about his blog since I first discovered it a few months ago. I have just been too busy drooling over the pictures of cool stuff that he posts.

Jon's Random Acts of Geekness has everything from cartoons and comics to monsters and superheroes. Many of his posts brings back fond memories of stuff that I used to have as a kid in the 1970s. I love his theme days that include Sunday Funnies, Monster Mondays and Give-A-Show Fridays.

If you are a big geek like me, then you need to check out Jon's Random Acts of Geekness. You never know what might pop up next on his blog.
Posted by Jamdin at 11:36 PM 1 comment:

Clifford Meth has posted about an auction to help Gene Colan at his blog, Everyone's Wrong and I'm Right. The legendary comic book artist has a failing liver. He worked for Timely Comics and Atlas Comics in the Golden Age before working for DC Comics and Marvel Comics in the Silver Age. Gene Colan also did work for Archie and Dark Horse.
Posted by Jamdin at 11:32 PM No comments:

I needed a break from writing stories today and played with two online character makers. I ended up making two versions of the American Knight:

The first American Knight made with Create Your Own Superhero found at MarvelKids.com (I can imagine this superhero being active in the 1970s): 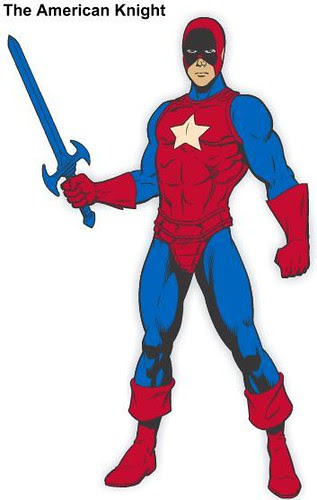 The second American Knight was made with HeroMachine 2.5 at Ugo.com (I can see this superhero being active today): 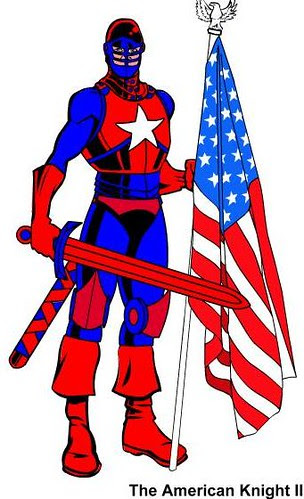 The immediate differences between the two is the color palette and the detailed items. The color of the Marvel Kids superhero maker is more subdued and what you would find on the printed page. The color found at HeroMachine is much vibrant but they give you the option of playing with two colors per items (see the helmet, breastplate, the leggings and the sword for the effects of having two different colors for one item). The only armor that Marvel Kids had were for Iron Man while HeroMachine had a lot to choose from and they had more details. HeroMachine also had more miscellaneous items such as the American flag and the sheath for the sword.

Both are fun to play around with but my favorite has to be HeroMachine because of the wide variety of color and the amount of detailed items available.
Posted by Jamdin at 3:00 PM No comments:

The Iron Man P2 trading card was found in Non-Sport Update v.19, #2 (April/May). Since this is the opening weekend of the Marvel Comics movie, I thought I would post the front and back of the trading card. 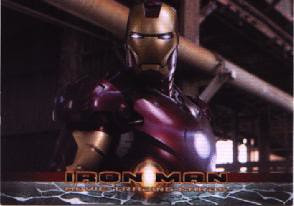 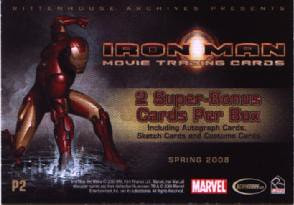 I probably will not see the movie this weekend since I'm doing yardwork and I'm broke as usual.
Posted by Jamdin at 12:39 AM No comments: