This post is later than usual for Blogger was having graphic problems for most of the day. Anyway, the cover of these last two issues of the Zorro series from Marvel Comics were done by Alex Toth. Zorro #11 (October 1991) features "Engagement With Death" written by Bruce Lansbury and Ian Rimmer, penciled by Dave Taylor, inked by Colin Fawcett, colored by Louise Cassell and lettered by Stuart Bartlett. This issue deals with Diego's father being visited by Francesca, whom he has been writing letters to and decided to marry. Of course, she is not what she appears to be and trouble forces Zorro to appear. 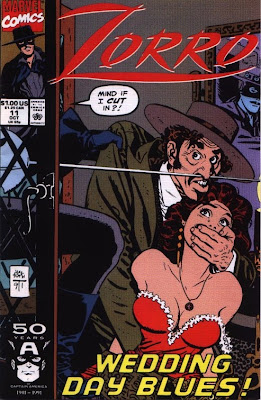 Dave Taylor did the interior artwork for Zorro #12 (November 1991). "Saints and Sinners" was written by Ian Rimmer, colored by Louise Cassell and lettered by Stuart Bartlett. I like this issue the best for it deals what would have happened if Diego never donned the mask. 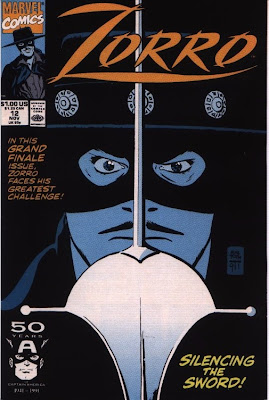