Mike Grell and Sergio Aragonés team up for Jon Sable Freelance #33 (February 1986). They not only did the cover but also wrote, penciled and inked the story titled "Cave of the Half-Pints". Jon dons his B. B. Flemm's disguise to meet Sucio Eroganes along with Mike and Eden in Los Angeles. Sucio is a cartoonist doing the storyboards for the movie based on Flemm's leprechaun books. The opening sequence's artwork is, of course, done by Mike Grell. The storyboards is done by Sergio Aragonés and follows three leprechauns (Grog O'Leary, Dusty Cruster and Dooley) being kicked out of Dublin's faery mound in 1847. They meet a Red Man on a ship sailing to America, where the trio sets up their faery mound. They start making their own special brew and have several misadventures throw the years. 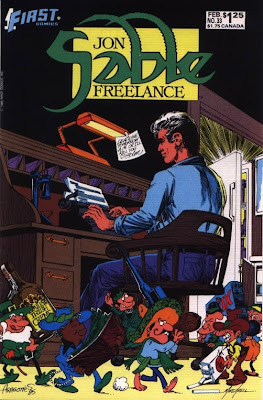