This 2011 McDonald's The Brave and the Bold Happy Meal Batman with a batarang in his right hand was yet another figurine in the dollar bag that I picked up a local thrift store a few weeks ago: 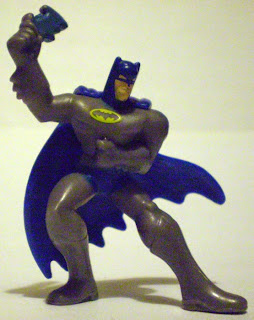 He is mostly blue and gray with some flesh, yellow and black. His boots and gloves should have been blue instead of gray. 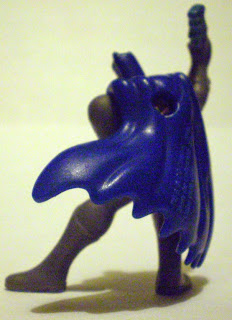 This Batman figurine looks like it would be pain to stand up but it's not.
Posted by Jamdin at 4:52 PM No comments:

I found this 2011 McDonald's The Brave and the Bold Happy Meal Joker figurine in the same dollar bag that I picked up at a local thrift store a few weeks ago: 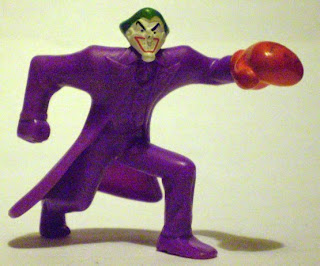 He is almost all purple with an orange boxing glove along with his traditional green hair, white face and red lips. 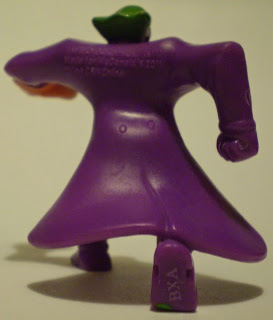 The Joker figurine can be a pain to stand up for he is standing on his right toes, which makes for a small surface area.
Posted by Jamdin at 9:41 AM No comments:

This 2011 McDonald's The Brave and the Bold Happy Meal Riddler figurine is from the same dollar bag that I picked up a few weeks ago that had the Aquaman figurine: 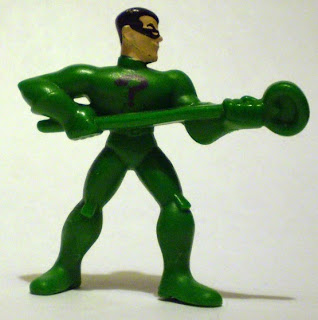 I like how the question mark is in black on his chest. 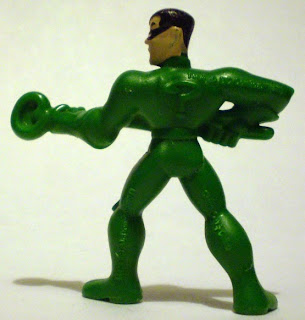 Shame that the question mark on his back was not done the same way. This Riddler is almost completely green for the only other colors are black and flesh.
Posted by Jamdin at 2:42 PM No comments:

I picked up a bag of ten toys a few weeks ago at a local thrift store for a dollar. One of them was Aquaman from McDonald's The Brave and the Bold Happy Meal in 2011: 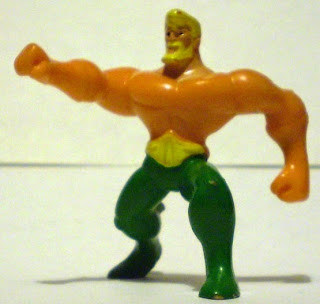 This is a really cool collectible figurine and the yellow, orange and green colors just pop. 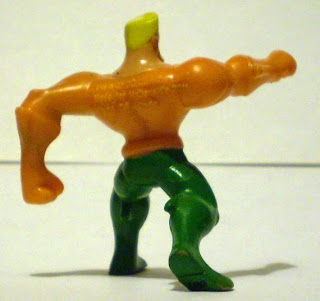 You may be wondering why I haven't posted this before. That is because I finally got a Olympus FE-170 replacement camera that I actually won on eBay at a really low price. I really missed the macro for taking pictures of small items.
Posted by Jamdin at 3:34 PM No comments: 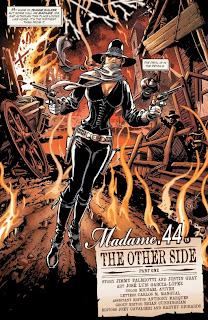 Her white scarf reminds me a little of The Shadow's red scarf. Her costume was originally all white but now it's basic black with white accessories. Anyway, she starts the story facing a gauntlet of supernatural demons as she is trying to get to Kerberos before she flashes back to where the nightmare started. I won't go into detail for you really need to find a copy of the comic and read it for yourself. 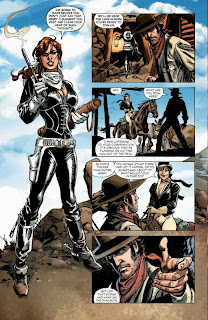 The original origin had a group of thieves cheating Jeanne Walker's father out of the gold mine. In the New DC 52 version, Henry is pushed by a saloon gal to get them out of the way before they do him in. She was originally a blonde that dyed her hair red but she is a redhead right from the start in this version.

I can't wait to read how the origin of Madame .44 plays out and for her to fight the devils and Kerberos. This looks like one horror western series that I don't want to miss.
Posted by Jamdin at 4:45 PM No comments:

Yes, I know today is Easter but I have not picked up any of this holiday offerings featuring any DC Comics of Marvel Comics characters. In fact, the only thing I found at one of the local stores was a Spider-Man plastic egg with stickers inside. Instead of an Easter treat, I'm posting the Justice League Valentine Candy Card Kit that I picked up a few weeks ago. Originally priced at $2.99, I picked it up for $0.89. 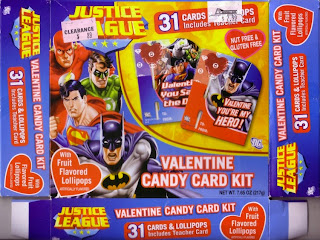 Batman, Superman, Green Lantern and Flash are featured on the front of the box. There are several text on the front and the flaps that claims that thirty-one cards, fruit flavored lollipops and a teacher card are included. The candy is claimed to be nut and gluten free. 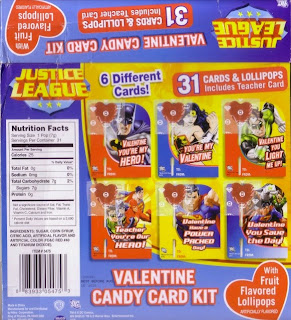 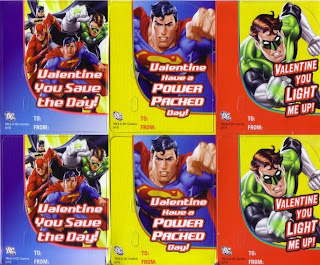 There is a big sheet of the Valentine cards with five different cards that include Justice League coming at you aka Valentine You Save the Day, Superman, Green Lantern, Wonder Woman and Batman. Notice that Superman is in his classic costume with the red shorts. The back of the cards are blank. 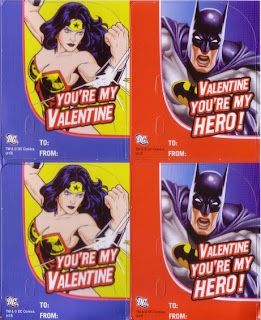 Does Batman looks shocked with his mouth hanging open like that? 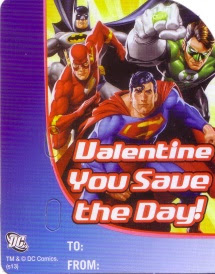 This is the loose Justice League card that is supposed to be the teacher card. Notice that it features Superman, Flash, Green Lantern and Batman coming at you instead of what is shown on the back of the box. It is clearly not a teacher card, which is a big disappointment. That means that there are only five different cards instead of six. 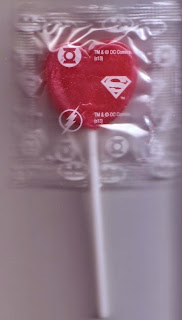 The fruit flavored lollipop taste more like cherry to me. The wrapper has the symbols from Batman, Green Lantern, Superman and Flash. Wonder Woman strikes out again and has no symbol featured (I guess the stylized WW would have been too much trouble to include). 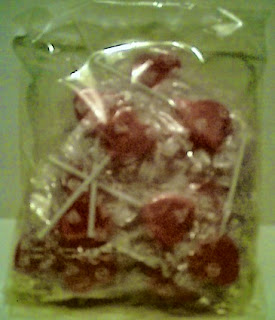 I snapped a picture of the unopened bag of fruit flavored lollipops that came with the Justice League Valentine Candy Card Kit (the other pictures are scans). While you actually have thirty-one cards, you only get thirty lollipops. I actually have twenty-seven now because I ate three while writing this post.
Posted by Jamdin at 3:25 PM No comments:

Vision Will Be In The Avengers: Age of Ultron

Now Paul Bettany Confirms Vision Role in ‘The Avengers: Age of Ultron’ is a bit of really cool comic movie news because I am a fan of the actor and the character.
Posted by Jamdin at 12:43 AM No comments: 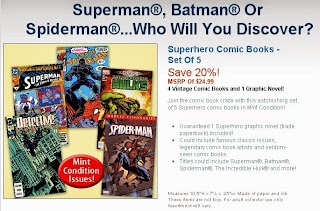 Instead of a pack of trading cards like the last time, this set includes four comic books and one graphic novel. I actually don't have any of the comics pictured in the above ad but I doubt that I will get any of them. I can't wait to see what I get in this comic grab bag.
Posted by Jamdin at 11:06 PM No comments:

I knew that I would eventually find a Lego Movie Happy Meal cup #3 with Batman in a thrift store someday but I never thought it would be so soon after they were first released. I found one yesterday for a whopping fifty cents. The only one I got with a Happy Meal was #5 featuring Good Cop/Bad Cop. They feature a 3D flicker effect so you get different images at different angles.

The first image features a back/side view of Wyldstyle (I couldn't capture the front view of her): 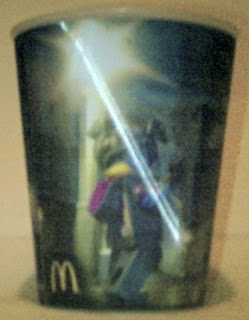 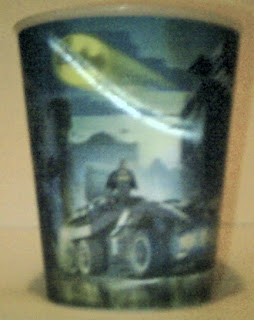 The final picture features Batman holding a batarang (he held it higher in the flicker image): 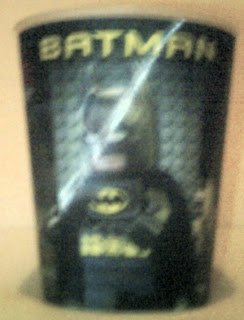 Sorry about the less that great pictures for it was rather hard to snap pictures using a flash and my room lighting is not up to par to use my cheap digital camera without it.
Posted by Jamdin at 4:24 PM No comments:

Archie Andrews To Die In July

Life With Archie #36 is set to be released on July 16, 2014 and will feature Archie Andrews sacrificing his life to save a friend according to Newsarama's Archie Comics to kill ARCHIE ANDREWS in July. The series has featured two timelines where he grew up and married each of the girls, Betty and Veronica. His fate will be the same in both parallel worlds. Life With Archie #37 will be the final issue and will take jump a year later and focus on how his friends are living without him. 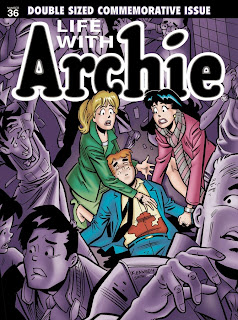 Legendary actor, Mickey Rooney, died yesterday at the age of 93. I mostly remember watching him in movies as Andy Hardy during the weekends when I was growing up. He was also the voice of Santa Claus in four Christmas TV animated/stop action specials. Here is Elvira with Mickey Rooney: 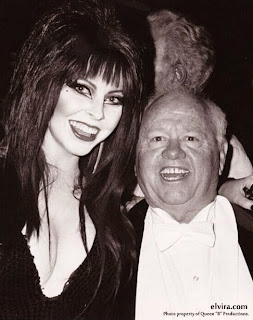 Elvira with Mickey Rooney (photo courtesy of Elvira.com)
Posted by Jamdin at 2:58 PM No comments: