Doctor Muscles: Journal One is a 146 page full color paperback that collects the first five issues from Bogus Publishing. The mature science fiction stories were written by Austin Tinius and Robert Salinas. Various artists include Andrew Whyte, Stefano Cardoselli, Antonio Brandao, Cecilia Latella and Ilaria Bramato. The cover artwork was done by James Brunner. The publisher’s synopsis states “The smartest man in Philadelphia, Dr. Arthur E. Muscles, is about to retire from a life of science when things go awry. A fortuitously modified formula at his research laboratory transports Dr. Muscles to another dimension, known as Quargo. Dr. Muscles now finds himself the lab rat in a maze full of perverted wizards, enslaved species, beastly giants and western motifs. His only shot at returning to Earth is to reach the Ultra-Lord at the end of the maze. Along the way, Dr. Muscles picks up various misfits and does his best to do the right thing, which usually ends up backfiring.” 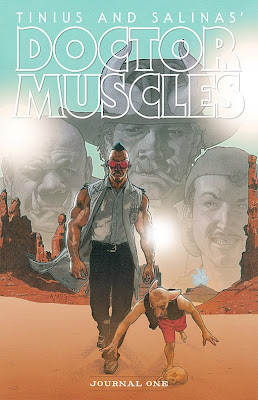 “The Doctor Is In” is the first chapter and introduces Doctor Arthur E. Muscles, the smartest man in Philadelphia. One of his experiments goes wrong and the resulting explosion sends him to a planet in another dimension named Quargo. The planet has seven suns and is ruled by the Over-Lord. Muscles tracks down Mickey, a humanoid rat that stole his shoes, who he enlists as his guide to Vinny’s castle. The ratman is annoying but he quickly becomes my favorite character. The pair run into a giant Droxin that Muscles kills but Mickey will brag throughout the series that he did it thus earning him the title of Droxin Slayer. They then run into bat-like creatures that are slaves to Vinny. Muscles finally has a showdown with the perverted mage. I really like this chapter and give it a solid A.

The next two chapters are “Back In Black” and “Escape From Hell” that finds Doctor Muscles in the other dimension’s version of Hell. The Devil is an Old West sheriff and wears a key to the gate out around his neck. A duplicate key is rumored to be buried and everyone is looking for it. Muscles and Mickey meet Doris, a busty robot. She guides them to search for the duplicate key but they are quickly captured by the Bone-Heads, a group of sand burrowing skeletons. Overall, I give these two chapters a B- because the artwork was such a contrast to the first chapter.

The forth chapter is “Dear Droxin” and introduces Herb Boyer, a fellow scientist that was in the same room with Muscles when the explosion happened. He crossed over to Quargo two years to Arthur’s two weeks. Mickey is captured by a giant Droxin and takes him to an arena. He must fight the family of the the young Droxin that was killed in the first chapter. I give this chapter a B+ mostly because of what happened to Mickey even though it sets up the next chapter. Chapter five is “Junkyard Memoirs” and gives more background for Muscles and Mickey. This is my favorite story from the entire collection and earns an A+.

You can purchase Doctor Muscles: Journal One at Bogus Publishing for $14.95.
Posted by Jamdin at 12:14 PM 1 comment:

Holli Hoxxx: Volume One is a ninety-six page color graphic novel with story by Austin Tinius and Adam Tinius, artwork by Stefano Cardoselli and cover by Glenn Fabry. Published by Bogus Publishing and released in September 2012. The synopsis from the publisher states “The year is 2051 in New York City, and gravity is a thing of the past. For the last thirty years Tycho Industries has remained the only manufacturer and seller of gravity boots. Now a new company has entered the ring with a plan to finally restore gravity back to the city once and for all. The former face of Tycho, Holli finds herself thirty years in the future braving an unfamiliar world. With the ceremony to restore gravity back to New York in less than twenty-four hours, and a paralyzing illness weighing her down, Holli must find her father and discover her destiny before time is up.”

The artwork and story of Holli Hoxxx: Volume One feels like something straight out of Heavy Metal magazine without any nudity. The science fiction story starts with two construction workers finding her buried in the sand. They report the finding to their boss only to find her gone when he returns with them. Holli enters a dinner to get something to eat. A television set is on and the reader gets a quick history lesson about Thyco Boots that allows the wearer to stay on the ground provided that they are kept charged and the Newton, a small pyramid-shaped device that provides a wider range of artificial gravity. Seven much bigger Newtons have been built around the floating Manhattan island. They must be turned on at the exactly the same time so not to destroy everything.

The story switches from Holli making her way to Manhattan to the construction workers and other characters. She is not what she seems even though she became one of the hottest models in the world and the best spokes model that Tycho Industries ever had. Her journey and the various characters provides more insight to how different the world is without gravity. Overall, I give Holli Hoxxx: Volume One a B+ mostly because I got hooked on the young construction worker more than Holli herself.

Yes, October is just a few days away and that means that I will be participating in this year's Countdown to Halloween. I picked the following Cryptkeeper badge for this year: 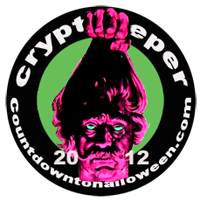 Countdown to Halloween 2012
Posted by Jamdin at 3:49 PM No comments:

I am liking Black Canary's costume the more I am exposed to it. This is the first panel from Birds of Prey #0 (November 2012). This issue shows her meeting Starling and Batgirl for the first time while she is working undercover for the Penguin. 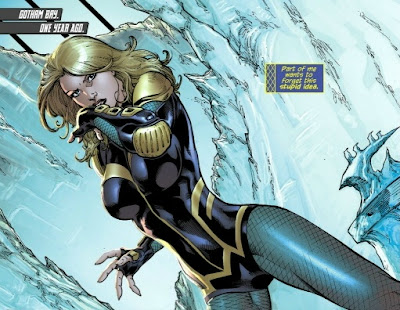 Pick up the issue and you will find what she wears under the costume.
Posted by Jamdin at 3:11 PM No comments:

Wow, DC's new Beowulf is a lot different from the old. For starters, he appears in a back up story in Sword of Sorcery #0 (November 2012) titled "The Perfect Soldier." His hair is white like the Warlord's and he has long sideburns like Wolverine and Sabretooth. He has one crazy colored eye and a weird tattoo on his chest. At least, this Beowulf still carries a big sword and knows how to use it. 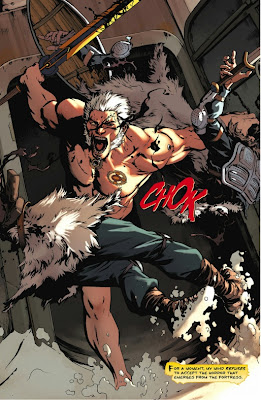 Check out Diversions of the Groovy Kind read the first issue of Beowulf #1 (January 1975).
Posted by Jamdin at 4:06 PM 3 comments: 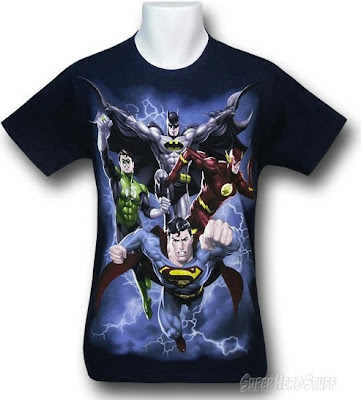 Click here to purschase Justice League Storm Is Coming t-shirt at SuperHeroStuff!
Posted by Jamdin at 3:34 PM No comments:

Ahoy! today be International Talk Like A Pirate Day so here be Captina Felina She first showed up in Detective Comics Annual #7 (1994). T' wrench shows up again as "The Bride of Leatherwing" in Batman Chronicles #11 (Winter 1998). 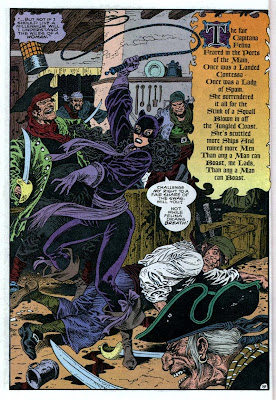 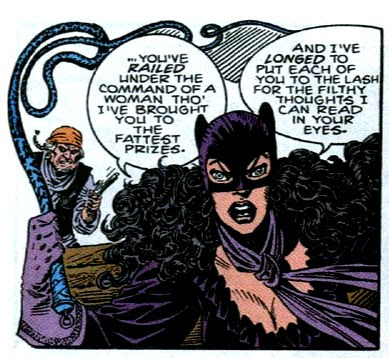 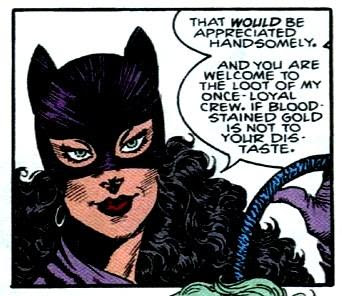 Posted by Jamdin at 3:55 PM No comments:

I Only Borrowed It

"The Boy Who Stole Superman's Cape" is a great story from Action Comics #0 (November 2012) and I think this panel would make a cool poster or a t-shirt: 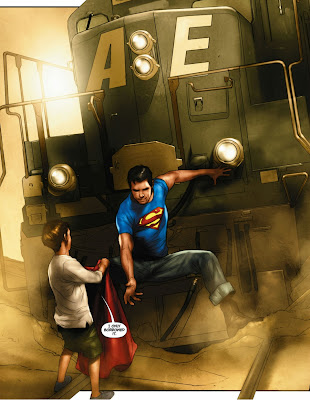 Posted by Jamdin at 4:22 PM No comments: 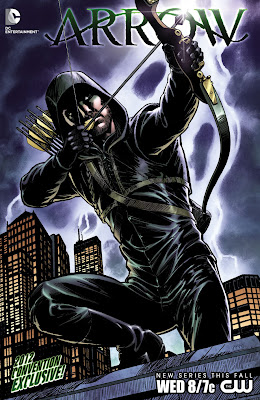 Posted by Jamdin at 4:33 PM No comments:

With all the latest gossip going around that Doctor Strange may be showing up in Thor 2, I thought this week's woman should spotlight the Sorcerer Supreme in an unique way as done by commanderholly: 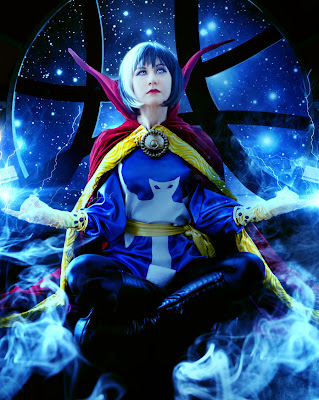 Posted by Jamdin at 2:36 PM No comments:

Dynamite's Dark Shadows #7 will have another cool cover by Francesco Francavilla: 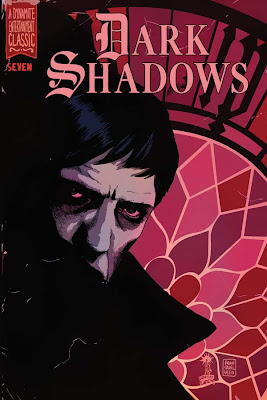 You can preview eight pages of the issue here.
Posted by Jamdin at 11:32 AM No comments:

Christopher Wietrick and KC McNeely thinks so too according to Kansas Artist Campaigns To Rename Hometown Smallville. I would love to see it happen for I live about a hundred miles west of Hutchinson, Kansas.

I would also like to see Goodland, Kansas renamed Jericho.

Posted by Jamdin at 3:21 PM No comments:

Be sure to check out and click around on the Star Trek forty-sixth anniversary tribute logo at Google: 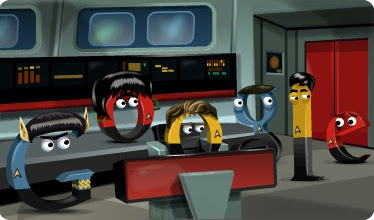 Posted by Jamdin at 2:36 PM No comments:

Yeah, I could not think of anything to post for Women Wednesday yesterday so I am posting a Wonder Woman t-shirt featuring the artwork of Alex Ross today: Click here to purchase this Wonder Woman Deflect t-shirt at SuperHeroStuff!
Note: The electricity went out while I was about to publish this post.
Posted by Jamdin at 3:45 PM No comments: