Wow, according to Warner Bros. Casts a Surprise Lex Luthor and Alfred for Superman/Batman, Jesse Eisenberg is set to play Lex Luthor. Here he is at the 83rd Annual Academy Awards in 2011: 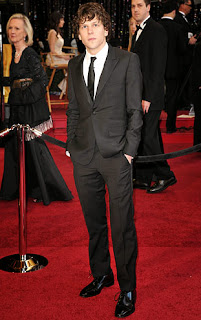 The same article states that Jeremy Irons is set to play Alfred in the same movie.
Posted by Jamdin at 4:25 PM No comments:

SuperHeroStuff has a new t-shirt featuring Superman taking a selfie and he is wearing his classic costume (you can get a 12% discount and a free button when you use code cupid12 for orders over $25): 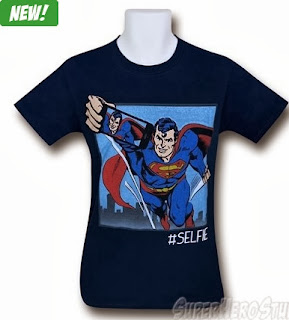 Click here to purchase your Superman Taking A Selfie t-shirt at SuperHeroStuff!
Posted by Jamdin at 4:56 PM No comments:

Catwoman #27 is another story set in Gothtopia. Here is the cover featuring Catbird: 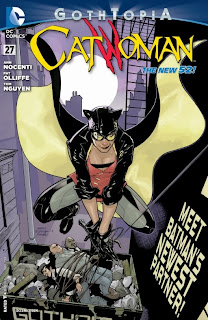 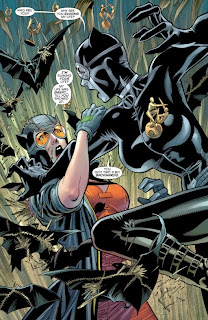 Posted by Jamdin at 4:41 PM No comments:

Will Arnett Is Batman

Will Arnett is providing the voice of Batman in The Lego Movie so check out the following clip for a taste:
The animated movie will have appearances by other superheroes from DC Comics including Superman, Green Lantern and Wonder Woman. I swear that I caught a quick glimpse of Green Arrow too in a recent trailer.
Posted by Jamdin at 1:32 PM No comments:

I tried my luck at the local vending machine dedicated to pencil top erasers featuring superhero symbols from DC Comics. I picked up two more Batman pencil top erasers along with a Superman S shield pencil top eraser. I can't say that I'm really super impressed with this one because it actually comes in three parts: the thick red base with two holes, a super thin yellow layer and a thin red S cutout with two pegs. As you can tell from the pictures below, the two layers do not mesh well with the base (yes, I tried squeezing them together in hopes of a tighter seam but it didn't happen) 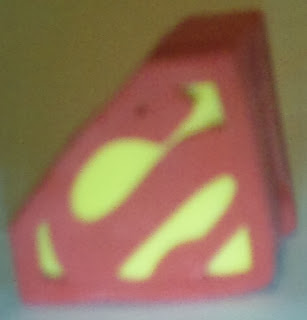 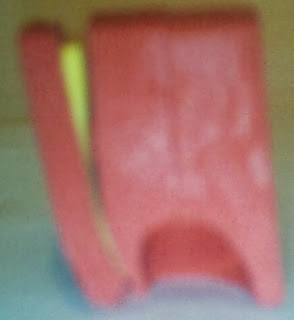 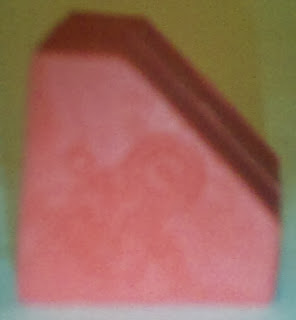 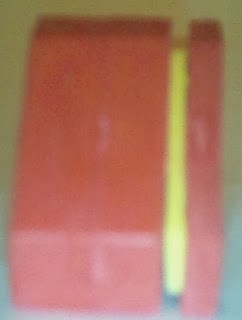 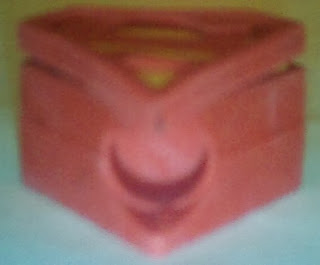 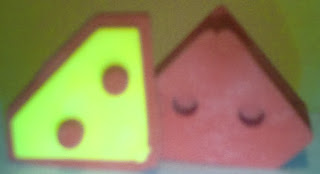 Posted by Jamdin at 4:02 PM No comments:

I went to play Superhero City earlier and found this: 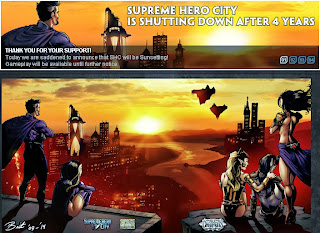 The second thing I noticed was that the name of the game had officially changed from Superhero City to Supreme Hero City (the game was rebranded last summer when Capital Games took it over). I did some digging on the forum and found Final Days of Supreme Hero City with the following announcement:

Beginning Thursday January 23, 2014 Supreme Hero City will begin the process of sunsetting. This will culminate in a total game / server shutdown sometime after Thursday March 27, 2014.

PvP events will continue to run thru February 13, 2014, after which the game will remain live for at least another 6 weeks.

If you have any questions regarding what this means to your account you may send in a support ticket and we will work to get you the answers you need. You can also check our Terms of Service and Digital Serve agreements for quicker answers.

That was the business end of the message, now onto what we mean…

For almost 5 long years this "City" has been alive, thriving in a way that has made other gaming companies envious. We are simply overwhelmed by the connections we have with you, we are often left speechless by your passion and dedication to this little project that was started so many years ago, with such a simple and modest goal. Never intending to redefine the facebook gaming space, we did. Never seeking to change the rules by which success would be measured for core games in the social space, we did.

The good, the bad, the mediocre… it all had a profound impact on us, our game and our relationships with you, the player.

The entire team at Klicknation / Bioware / Capital Games had a vested interest Superhero City. We lived and died by this game. It would be difficult to overstate the importance Superhero City has in our company's lore and learnings. It is you, the players, that brought so many of those lessons to light, that brought so much complexity and thoughtfulness to the game that we had to step-up our commitment. Lost weekends, holidays, consistent 12, 14, 16 hour days… all because we, like you, were passionate about this City and never wanted to see it decline.

With the landscape of Facebook gaming in an ever-constant state of flux and the state of online gaming growing at a blinding pace we regretfully have to call this chapter just about closed (we're giving you about 9 more weeks to play with your accounts.) We are taking all of the lessons learned, the experiences had, and moving them into our next project. We will build a better, more engaging product the likes of which the world has never seen. And we have you to thank for that.

Enjoy the final weeks, we've put just about everything on sale and hope that you all get a chance to purchase that card you've always wanted and battle your friends (and foes) one last time.

That about does it for the "official" post. Look for some of our team members to make personal posts in the coming days / weeks. We are fraught with emotions, and as they cool down we certainly will want to share some more of our experiences and memories with all of you.

Batgirl #27 (March 2014) is another Gothtopia-related story. 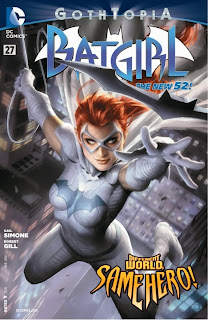 In this issue, Barbara Gordon aka Bluebelle teams up with Daybreak: I have to wonder why she is called Bluebelle when she has a bat-symbol on her chest. Shouldn't she be called Bluebat or Batbelle?
Posted by Jamdin at 1:21 PM No comments:

Damian Wayne gets animated in the new Batman: Son of Batman animated movie coming Easter weekend according to Newsarama's Animated BATMAN: SON OF BATMAN Trailer. He even dons the Robin costume. Here's the trailer:
Posted by Jamdin at 10:18 PM No comments:

There are several reasons why you should pick up and read Detective Comics #27 (March 2014) and the start of Gothtopia is just one. Where else are you going to see biker Batman and Catbird aka Catwoman riding their batcycle and catcycle?

The cover of Batgirl Annual #2 features art by Clay Mann. The super heroine is tangled in the back bending vines of Poison Ivy: 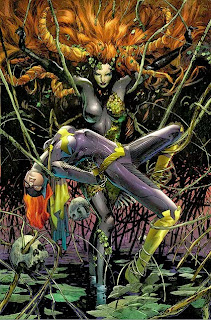 The issue hits the newsstands on April 30, 2014. Gail Simone is the writer and Robert Gill is the interior artist for this issue from DC Comics.
Posted by Jamdin at 1:32 PM No comments:

According to Wally West Makes His DC Comics New 52 Debut In April, the sidekick turned main superhero will appear in The Flash Annual #3. I have to wonder if he will start out as Kid Flash again or if he will even have powers. Either way, I can't wait to see Wally back.
Posted by Jamdin at 1:33 PM No comments:

This could be good news: Ant-Man Casts Michael Douglas as Hank Pym, Paul Rudd is Scott Lang. Hank was the first Ant-Man in the comics while Paul was the second. Eric O'Grady was the third but either he has not been cast yet or he will not appear in the movie. I do hope that Janet Van Dyne aka the Wasp will appear or will at least be mentioned.
Posted by Jamdin at 3:37 PM No comments:

The Joker had his own series in the 1970s so Sinestro Gets Ongoing Series In April. The creative team will be writer Cullen Bunn and artist Dale Eaglesham. Sinestro #1 hits the newsstands on April 16, 2014.
Posted by Jamdin at 3:42 PM No comments:

To be honest, I didn't know there were two previous printings of Geek-Girl #0 from Actuality Press until I received the news about the third printing in my email. Here's an introduction:

"When 'Little Miss Popular' Ruby Kaye lands a pair of super-tech glasses (invented by brainiac college geek Trevor Goldstein) in a game of Strip Poker, she's granted flight, super-strength, and - due to a flaw in the glasses' programming - super-klutziness! And this is just the beginning of the changes the glasses will wreak on Ruby." 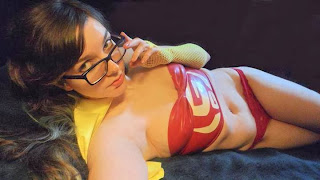 Lady Larkin is the model that appears on the photo variant cover. Geek-Girl even has her own official Facebook group here while you can find Lady Larkin's Facebook page here. 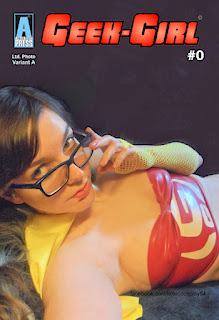 I have yet to watch All-Star Superman so I'm hoping to catch it on HBO Family at 6:10 pm Central (7:10 pm Western) tonight. The animated movie will replay throughout the month. We finally got a sound bar for our new television yesterday since we have been having problems hearing movies on the HBO channels for some reason. So far, I missed watching The Hobbit: An Unexpected Journey and Jack The Giant Slayer.
Posted by Jamdin at 2:16 PM No comments:

I only hit two of the three thrift stores that I usually visit this morning. I picked up a McDonald's Marvel Heroes Thing from 2010. If you slide the button on the back and slam him down hard, then he says "It's clobberin' time!" The action figure is 3 3/4" high and his head moves just a bit to either side. I picked up the McDonald's Marvel Heroes Thing for fifty cents. 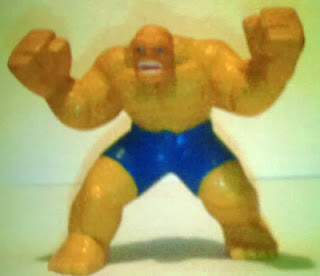 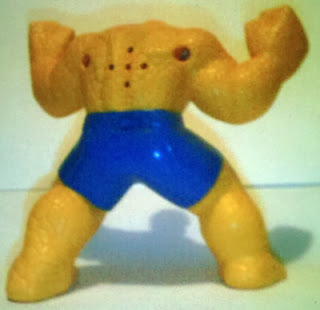 Posted by Jamdin at 1:14 PM No comments: