Seven Page Preview Of The Red Circle: The Hangman #1

Comics Continuum has a seven page preview of The Red Circle: The Hangman #1 one-shot special from DC Comics that you can view here. 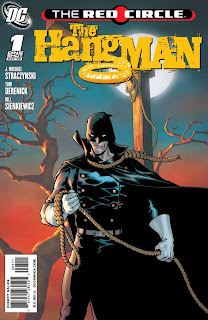 Posted by Jamdin at 3:29 PM No comments:

From Newsarma, here is an interesting picture of belly dancing Scarlet Witch from Comic Con 2009: 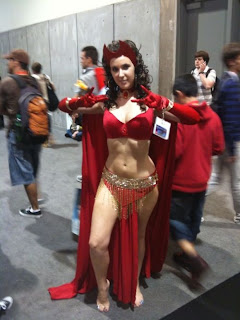 Here is the movie poster for Jonah Hex thanks to Comics Continuum: 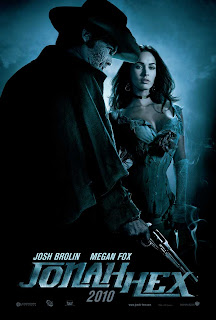 Posted by Jamdin at 3:58 PM No comments:

Adam West And Julie Newmar On Batman: The Brave And The Bold

According to Comics Continuum, Adam West and Julie Newar will be the voice of of Thomas and Martha Wayne on Batman: The Brave and the Bold episode titled "Chill of the Night" written by Paul Dini. Other major voices will include Kevin Conroy as the Phantom Stranger and Mark Hamill as The Spectre.
Posted by Jamdin at 3:52 PM No comments:

Email ThisBlogThis!Share to TwitterShare to FacebookShare to Pinterest
Labels: batman, cartoons, dc comics, links, the brave and the bold, tv

Have you checked out the cool Google logo for today that was designed by Jim Lee? If not, then feast your eyes on the following characters from DC Comics: Batman, Wonder Woman, Green Lantern, Plastic Man and Robin.

Posted by Jamdin at 3:23 PM No comments:

I am changing the Women Wrestling Wednesday feature into Women Wednesday so I can show the fair sex doing something other than just wrestling. Today's pictures features the sexy Alison Angel with Spider-Man and the Green Goblin. 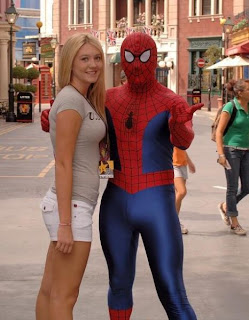 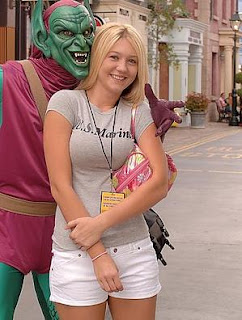 I picked up the new Amazing Spider-Man portfolios and notebooks when I picked up the new ones with the characters from DC Comics that I posted about on Friday. While I found four different portfolios, I could only find two different notebooks. I really like the first one since the background looks real and Spider-Man is almost life like (Venom on the other hand does not). The last one features Spidey swinging away from some of his greatest foes: Green Goblin, Vulture, Doc Octopus, Electro, Rhino and Sandman.
The Amazing Spider-Man porfolios: 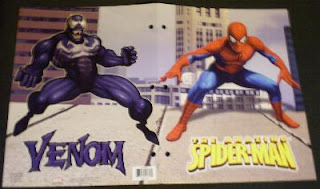 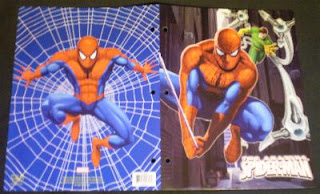 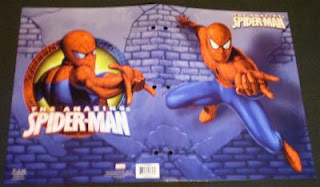 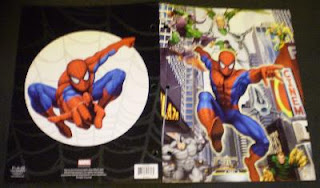 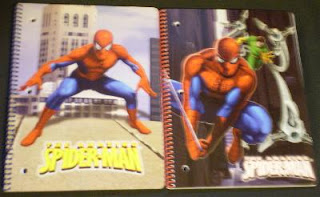 Posted by Jamdin at 2:35 PM No comments:

I picked up the new DC Comics portfolios (aka pocket folders) and notebooks at the local Super Wally World today. The covers include the following: Batman and Joker, Batman and Aquaman, Batman with Aquaman, Superman and the Flash (the back of the portfolio has the Super Powers logo) and Wonder Woman. 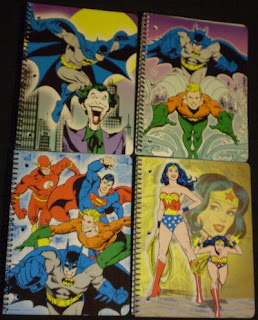 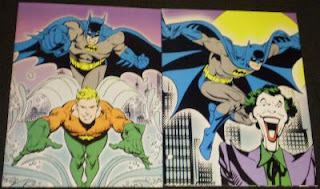 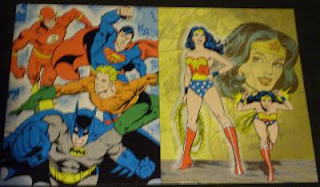 I found The Adventures of Tintin Volume 5 yesterday at a local thrift store for a dollar. The hardback collects the following three adventures: "Land of Black Gold", "Destination Moon" and "Explorers on the Moon". I was surprised that it was it in good condition considering that this was a used book. 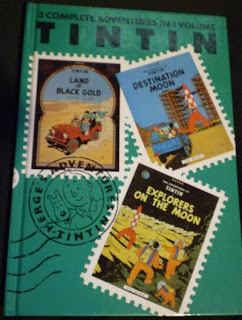 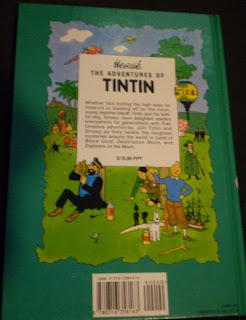 I remember watching the Tintin cartoon on tv back in the early Nineties but I never read any of the comic strips so this is indeed a treat. If you want your own copy, then you can get one using the following:

Posted by Jamdin at 4:20 PM No comments:

The Maid of Steel wrestles a very muscular redheaded woman in this video:

Newsarama posted news that Ryan Renolds Cast as Hal Jordan in the live action Green Lantern movie that will start filming in January, 2010. He is no stranger to comic book movies for he appeared as Hannibal King in Blade: Trinity and Deadpool in Wolverine: Origins.

Posted by Jamdin at 2:20 PM No comments:

You may wonder what these two comics have in common. Other than the fact that both were originally sold for fifteen cents, they have nothing in common. However, I did find them at the first local community flea market this morning. There are not very many flea markets around here so I try to go to all that I can. Most of the vendors that usually sell "homemade" candles, jewelry, perfume and soap at the local craft stores were there. I found one table that had about a dozen comics spread out. Most were Disney comics that were around ten dollars. I did find Gold Key's Boris Karloff Tales of Mystery #25 (March 1969) and DC Comics' Wonder Woman #188 (May-June 1970) for two dollars each. They are in fair condition and I was surprised to find them for that price. I have three very worn copies of Boris Karloff Tales of Mystery #66, 73 and 76 while my oldest Wonder Woman issue is #250 from 1978. Here are the covers: 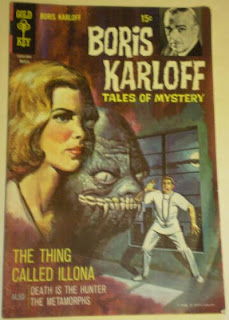 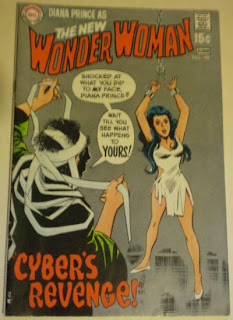 Posted by Jamdin at 2:02 PM No comments:

To be honest, I had no clue what this toy was other than Spider-Man sitting on a barrel. I had to search Google and eBay to find out that it was a water squirter. According to the auction, this toy was released in 2002 by Playfully Years. The Spider-Man water squirter that I found was missing the bottom part. The toy is 2.5 inches overall. The back has 2001 Marvel and Playfully Yours China while the bottom has three holes. Not a bad find for fifty cents. 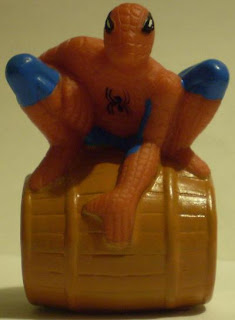 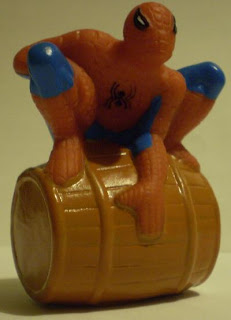 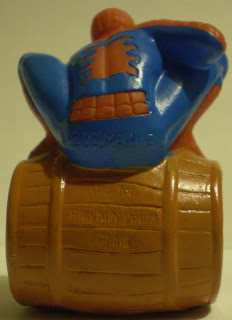 Posted by Jamdin at 9:58 PM No comments:

Green Lantern Spotlight has news, podcasts and reviews related to the Emerald Warrior. You will also find some news about the new animated movie. If you are a fan of Hal Jordan or the GL Corps, then you might want to check out Green Lantern Spotlight.
Posted by Jamdin at 12:54 AM No comments:

The toughest ladies from the 1970s battle in this match from Pepeloco999:

Miss America celebrated the 70th anniversary of Marvel Comics, which was then called Timely Comics, in Miss America Comics 70th Anniversary Special #1 that was released June 11, 2009. She was created by created by Otto Binder, who also co-created Mary Marvel and Supergirl, and Al Gabriele. This cover was drawn by Dale Eaglesham: 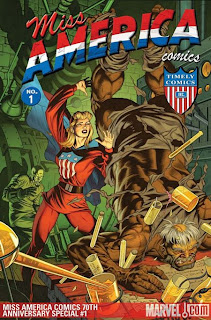 Hope every one has a safe Fourth of July.
Posted by Jamdin at 4:28 PM No comments:

Fourth of July Countdown #2: The Shield

Here is the Shield as drawn by Francis Manapul for the standard cover of The Shield #1 from DC Comics on sale September 9: 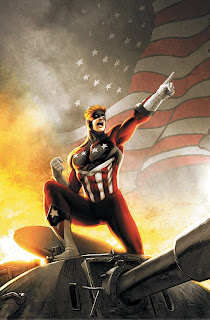 Posted by Jamdin at 9:56 AM No comments:

Here is Liberty Belle as drawn by Alex Ross and used for the cover of DC Comics' Justice Society of America #8: 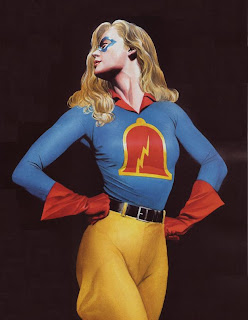 I was going to upload a new photo at PhotoBucket today when I discovered that the picture that I used for Archie And Gang Receives New Look somehow violated their term of use. So today I am trying out BlogSpot's add image function for the first time: 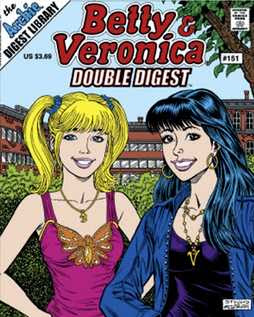 The occasional lover of Adam Warlock and Nova battles the strongest woman in the Marvel Universe (except for She-Hulk naturally). This women wrestling video was made by Pepeloco999 with Smackdown vs Raw 2008 and pcsx2 0.9.5 and a hacked GSdx graphics plugin.

Posted by Jamdin at 1:55 PM No comments: