I always love finding the 3-D comics published by Blackthorne Publishing, Inc. but I only have a handful of other titles including Jungle Comics and Twisted. BraveStarr in 3-D #2 (April 1988) is based on the cartoon series from Filmation and Group W Productions. I watched several episodes when they originally came out and enjoyed the science fiction western. This issue shows how BraveStarr met 30/30 but no 3-D glasses were included. The 3-D effect was hit and miss with my John Wayne 3-D glasses. The ad for Jungle Comics featuring Sheena really popped out. The back cover has an ad for Red Heat in 3-D series, which was based on the movie featuring Arnold Schwarzenegger and James Belushi. 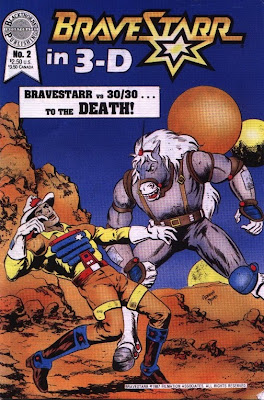 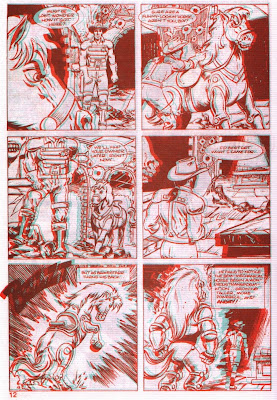 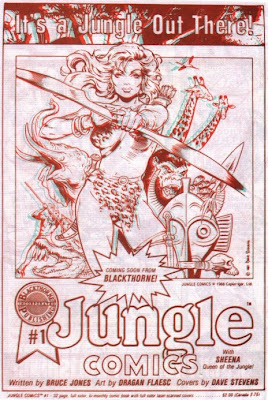 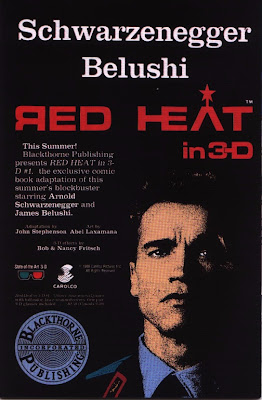 Roger Wilco (February 1992) #1 is based on the thrilling "Space Quest" computer games from Sierra Online or so the cover claims. I have never played any of the games and I really do not want to after reading this issue. Humor and science fiction are mixed in a not too subtle way. I do like the cover and interior art by John Shaw, who was also the writer, but not enough to get any more issues in the series. 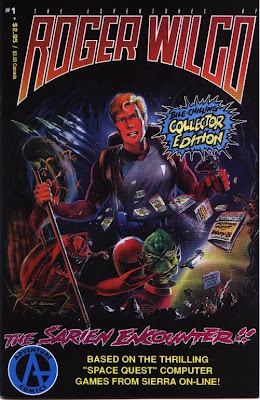 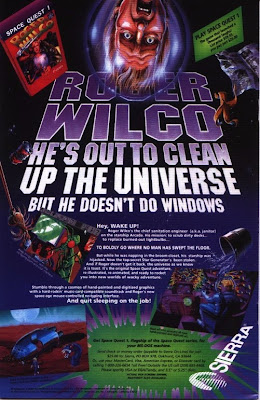 Captain Paragon and the Sentinels of Justice #2

Captain Paragon and the Sentinels of Justice #2 is the only comic from Americomics that I recently picked up. The issue is from 1985 and I already had it along with #4 and #5. I read it again just so I could catch the brief origin of Commando D. Besides, one can never get enough of Nightveil and Stardust. They team up with Scarlet Scorpion to form the Sentinels of Justice. I have a few issues of Captain Paragon's own series (#1 through #4) along with some other titles such as Black Diamond, Colt, Dragonfly and FemForce. 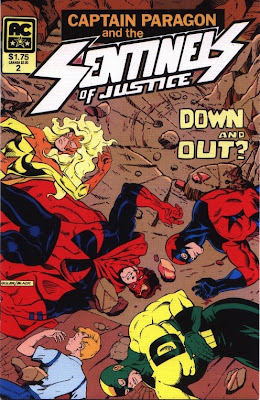 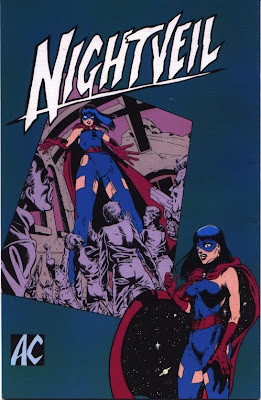 Moongem Comics hit twenty-two thousand visitors today. According to the counter stats, Alison Angel Universal Studies and Alison Angel are still the first and second search phases but they are now followed by manga women wrestling.
Posted by Jamdin at 3:50 PM 2 comments:

I picked up Non-Sport Update volume 21, #1 yesterday on a road trip (along with eighty-nine comics for a buck each but they will be subjects of future posts). On the back of the Take Along Price Guide is the ad for 70 Years of Marvel Comics Trading Cards that will be coming out in the spring of 2010 from Rittenhouse Archives. The free promo card was P2 featuring the classic Thor. 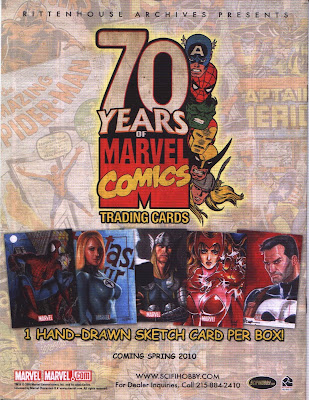 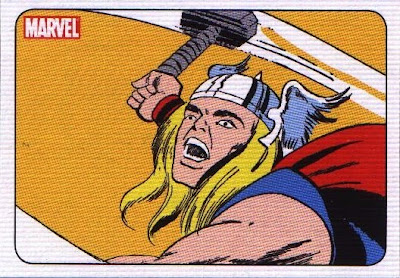 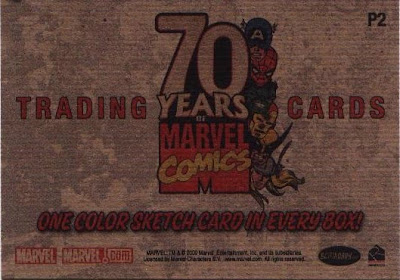 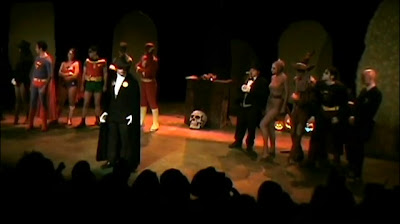 Here I am wearing the Iron Man t-shirt that I found at Dollar General: 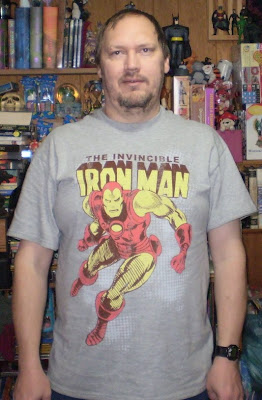 Blog Alert: Under the Giant Penny

Brian B and Brian A has a really cool bat blog called Under the Giant Penny. They write "about collecting and enjoying Batman memorabilia" along with posting some really cool pictures from their collections. They cover everything from Batman Crazy Foam to Transforming Batmobile Toothbrush.
Posted by Jamdin at 10:06 PM 1 comment: 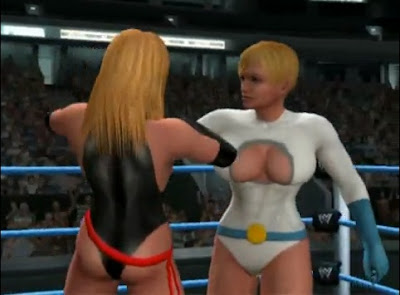 You can watch the women wrestling video here.
Posted by Jamdin at 10:50 AM No comments:

The pilot for the Human Target aired earlier this evening on FOX. I enjoyed everything from the acting to the story. The series moves into its regular time slot this Wednesday and I will be watching.
Posted by Jamdin at 9:55 PM 1 comment:

I found three Marvel t-shirts by Fruit of the Loom this morning at the local Dollar General store for six dollars each. The first was a red Captain America t-shirt in which he appeared to be so fighting mad that his face turned red to match his gloves and boots: 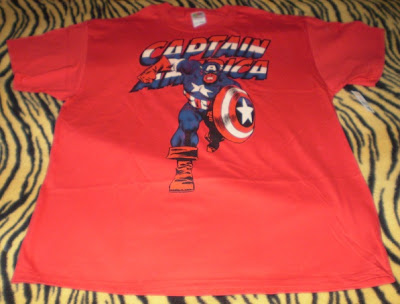 Next, I found a gray t-shirt featuring the Invincible Iron Man in his red and gold armor: 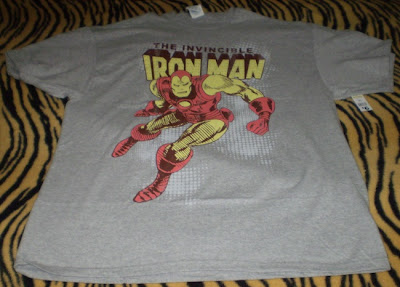 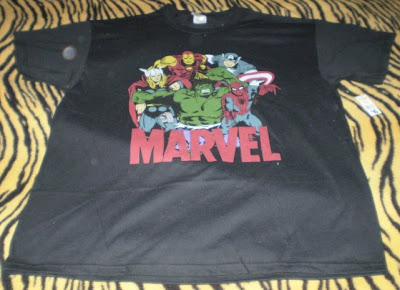 Here is a close up shot of the Marvel group: 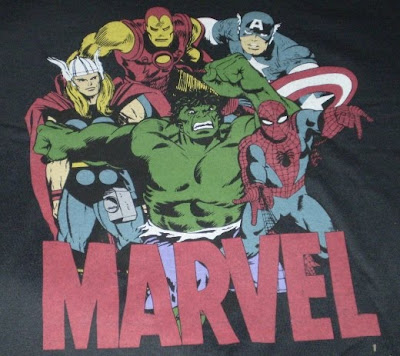 I love the costume that Lois Lane (Erica Durance) will be wearing at a comic book convention on the January 29 episode of Smallville titled "Warrior": 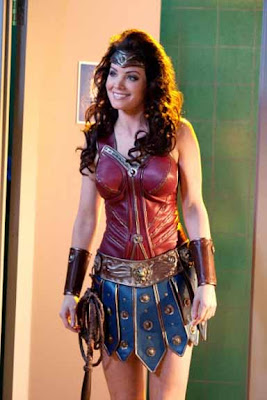 Yeah, Star Sapphire may be a villainess but she is a hot one without a doubt and I dig her tattoos (image courtesy of Veidt): 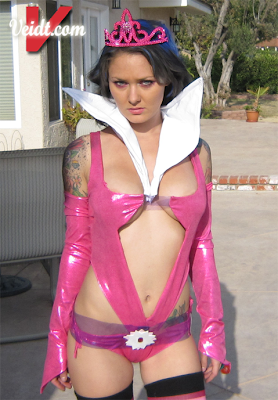 Two cartoon rockers battle it out as Jem, the pink-haired leader of the Holograms, duke it out with the black Pussycat, Valerie Brown:

Posted by Jamdin at 1:55 PM No comments:

Be sure to bookmark the web comic for it is one of my favorites.
Posted by Jamdin at 2:35 PM No comments: