Jon Sable Freelance #25 (June 1985) features "Homecoming Part 1: The Angel" and starts with him in the disguise of B. B. Flemm discussing his leprechaun books as a Broadway play with Eden Kendall. He then meets up with Mike Blackmoon minus the wig, mustache and glasses. She shows him a painting of a line that she did for the hunting article that he wrote. Sable goes home only to find the federal agent waiting to tell him that Sparrow is out to kill him since he did not kill him in the last issue. He takes Mike to a cabin to get closer and he starts telling her of his mother. 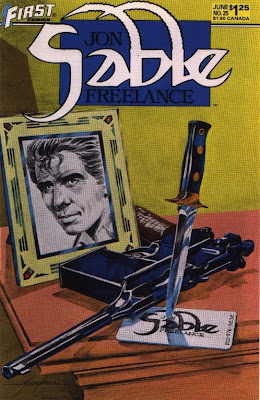 "Homecoming Part 2: The Moses Line" is the main feature of Jon Sable Freelance #26 (July 1985). This story is about how his parents met in the last part of World War II. His father, Captain Jack Sable, was part of the Eighth Air Force that got shot down over Belgium. He meets and fall in love with a resistance fighter code named Moses. 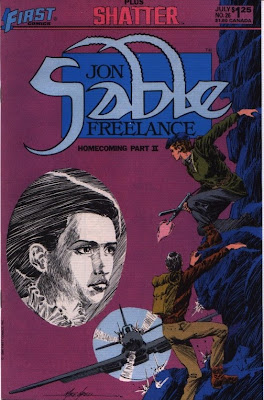 Both issues features a bonus Shatter story. Mike Saenz was the artist while Peter B. Gillis was the writer.
Posted by Jamdin at 9:52 AM