This issue is the start of a six-issue epic according to the cover of Greylore #1 (December 1985). Unfortunately, the series only last for five issues. Bo Hampton was the cover and interior artist. "A Pox Upon Him" was written by David Campiti, Kevin Juaire and Peter John Palmer. The colorist was Scott Rockwell while Bill Oakley provided the lettering. The story deals with a wizard (he is on the cover's left) finding out that the rogue Baru Greylore (he is on the cover's right) will charm his way into a lady's favor and stole her family necklace. The lady and her newborn son is banished by her husband. The offspring grows up loathing all adventurers, starts to dabble in sorcery and destroys his world. The wizard sets him on a mission to become a hero in hopes that the planet will be saved. The best part of this issue is when Chaliss (the woman on the cover) shows up looking to settle a score. 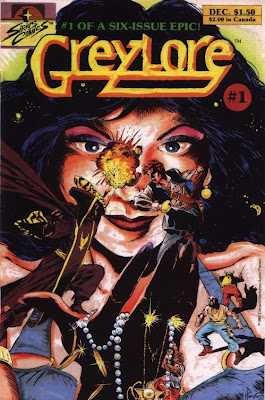