The cover of Doctor Strange, Sorcerer Supreme #3 (March 1989) features Stephen with an eye patch fighting alongside Valkyrie, Andromeda Attumasen and Odin...er, Interloper. The cover artist is unknown. "Dragon Ring" was written by Peter B. Gillis, penciled by Richard Case, inked by Randy Emberlin, colored by Bob Sharen and lettered by Janice Chiang. 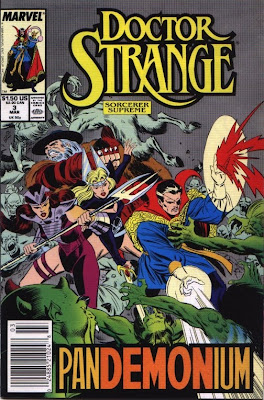