First Comics only published three issues of Warp Special that was a spin off from their Warp! series that lasted for nineteen issues. The titles were in reference to the first American science fiction play from 1971 titled Warp! written by Stuart Gordon and Bury St. Edmund. The play and back story became the basis for the comics. In the play, David Carson is a bank teller that learns that he is Lord Cumulus. As the avenger of the universe, he battles Lord Chaos. The play was originally performed by the Organic Theatre Company in Chicago, Illinois before moving to Broadway in 1973. Now who says you don't learn something new by reading this blog.

The cover of Warp Special #2 (January 1984) was by Marc Silvestri, who also provided the pencils of the interior artwork, and features Lord Cumulus and Sargon, Mistress of War. "Forged in the Flame" was written by Peter B. Gillis, inked by Mike Gustovich, colored by Janice Cohen and lettered by Pete Iro. In this issue, Lord Cumulus and Sargon are betrayed by Meroe to raise Ylem, who is trapped in the forge under the city of Fen-Ra. 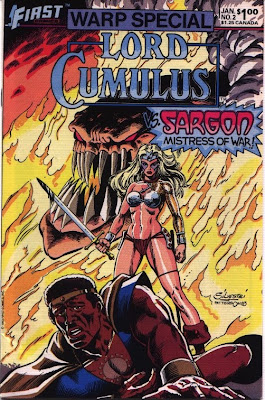