Mike Grell once again did the cover for Jon Sable Freelance #27 (August 1985). He also wrote and illustrated "Torch Song" that tells the tale of Jon Moses coming to America in 1951 to meet his father, Jack Sable, and his wife. We learn that his mother escaped the Germans during a bombing attack on D-Day and continued to work for MI9 after the war. He was a rebel during his teens before turning down an appointment to West Point that his father had set up. Jon went to Middlebury College and his father cut him off the family funds. He started blowing sax in a dance band and started to compete in the pentathlon. After a post-graduate course at the government's Vietnam finishing school, he competed and made the 1972 Olympics in Munich. The story shifts back to the present and Jon Sable makes love to Mike Bloodmoon while she is wearing a red sash around her head (there's some pretty adult soap opera moments here folks). 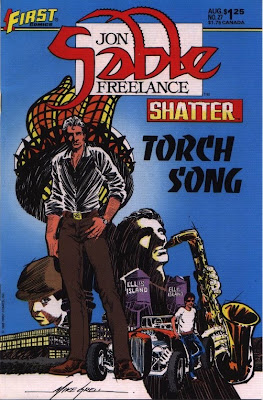 This issue also features another untitled Shatter story.
Posted by Jamdin at 10:05 AM