The cover of Convergence: Action Comics #1 (June 2015) features Lex Luthor, Wonder Woman and Superman from Earth 30 (the official home of characters in the Superman: Red Son mini-series) along with Superman, Power Girl and Lois Lane from pre-Crisis Earth 2. The story actually switches back and forth between Moscow and Metropolis. 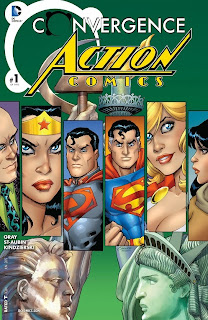 My favorite part of this issue is Power Girl. She has been shacking up with Andrew for the past year while under the dome. The loss of her superpowers has not been kind to her since she is gaining weight and having health issues that we all have. She flashbacks to her glory days of fighting the likes of the Ultra-Humanite and Solomon Grundy: 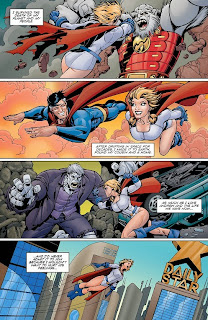 I have always been a fan of the pre-Crisis Earth 2 so this is one of my favorite issues in the Convergence event. I wish all of the other issues would have switched back and forth between the two cities that are going to do battle with each other.
Posted by Jamdin at 8:40 PM