I recently received a cool promo email from Richard Boom. He alerted me to a new horror comic book that is now available in print and digital copies called Calavera The Undead from Hangman Comics. The art and story is by Nevin Arnold, who is known as the writer of 2005's Honor Of The Damned.

"Calavera, a fun loving 80's rocker chick, falls to her death in 1989 only to instantaneously awaken in the year 2012. Now essentially a super powered zombie, deteriorating day by day, and sharing her body with a mysterious entity, this most unlikely heroine may be our last hope as dark forces plot to destroy civilization as we know it!"

And here's the digital cover: 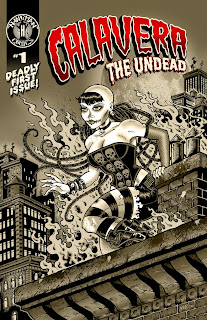