I was very disappointed with Dark Shadows #23 from Dynamite. This is the final issue of the series and felt rushed in a bad way. Mostly it centers around Emma, David Collins' friend that was turned into a vampire earlier in the series. She is seen talking to a shrink in a mental hospital before narrating flashbacks telling what happened to her after she escaped the possessed Barnabas Collins and his evil vampire crew. Emma tried to head back to David but was intercepted by Quentin Collins and his vampire hunter crew. Thanks to Blair's magic, Emma was shown several alternate futures with all of them having her turning David into a vampire. They buried her and she dreams of happier times. However, her story was far from done and she was unearthed by Barnabas and Jackie twenty years later. She was made human by the magical necklace that caused all the problems in the first place before she noticed a grown up David sitting in the car. Of course, the shrink doesn't believe all this and starts to take the magical necklace off. That's it and there is no mention of how the good Barnabas regained possession of his body. I would have liked at least one of two more issues before this one. I still like the cover art by Francesco Francavilla and the interior artwork by Nacho Tenorio. 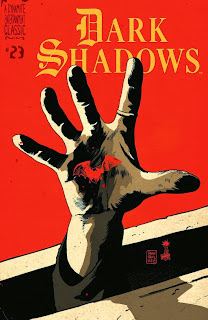