I found the only box of Wonder Woman 16 Valentines With 16 Rub On Transfers that the local Dollar Tree had on the shelf about two weeks ago. I'm not exactly sure when they originally came out but I'm guessing either last year or the year before. Wonder Woman is wearing her movie costume and the artwork looks a lot like Gal Gadot.

Unfortunately, the upper left corner of the box is a bit damaged and there is obviously a line cut by a knife on the bottom half. I'm not complaining because it was only a dollar and it was the only one the store had. 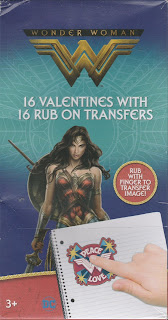 Front of Wonder Woman Valentines With Rub On Transfers box

The back of the box displays the four different Valentine's Day cards, a sample of the card backs and a sheet of the eight rub on transfers: 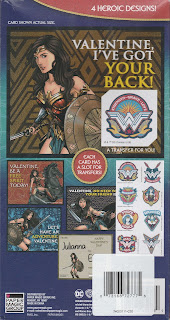 Back of Wonder Woman Valentines With Rub On Transfers box

There are two sheets of eight rub on transfers that each measures 2-1/4" x 2-1/4". They are mostly different designs of her logo with different words like love, strength and warrior. Three of the transfers actually has Wonder Woman. Unfortunately, the bottoms of the transfers are separating from plastic and are a bit curled. At least, they still have vibrant colors.

A sheet of 8 Wonder Woman Rub On Transfers

The Wonder Woman Valentines are huge measuring at 5" x 4-1/4". The first two feature artwork of Wonder Woman with her sword and shield:

The third Valentine features Wonder Woman on a horse with her sword drawn. The fourth card is extra long at 6-1/4" and features her again with her sword and shield (she must be attacking Steve Trevor after he gave her the wrong Valentine's Day gift).

The back of the third card features her on a horse again but with a different view. The final Valentine card features Wonder Woman in her classic arms crossed posed.

I like artwork on these Wonder Woman Valentines With Rub On Transfers. I'm a little surprised that a sheet of red heart-shaped stickers was not included since all the other boxes that I picked up did have them. Maybe a sheet of shield stickers would have been more appropriate.
Posted by Jamdin at 12:00 AM