This year's collection of horror stories from DC Comics is presented in Secrets of Sinister House 80-page Giant #1. The cover features a scared Joker with a blood-thirsty vampiric Batman from behind him. The original series started with #5 came out in 1972 (it was previously called The Sinister House of Secret Love, which debuted in 1971) and lasted for fourteen issues. 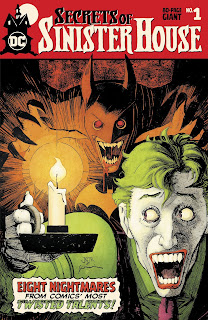 The first story features Red Rain Batman in "Nightmare Mist." He faces Talon from the Court of Owls as he tries to kidnap the very young Barbara Gordon. This was a very interesting story and a vampiric Batman should never try to make a toothy smile at a little girl.

The Atom is featured in the second story titled "The Footsteps of the Old Worm". Ryan Choi aka the Atom is asked to investigate why earthworms are coming to the surface after plenty of rain. The woman who asked for his help thinks it has something to do with the demolition foreman attacking his crew with a buzz saw. The old house that they were hired to demolish have no earthworms for a mile radius. What he finds under the old house is beyond words and makes me not to want to go fishing with earthworms ever again. Harley Quinn and Zatanna are featured in the third story titled

"Calling Dr. Bonkers!". Zatanna picks up Harley in the Nevada desert while on her way to a Halloween blow-out in Las Vegas. They stop at the Clown Around Inn when it starts raining at night. The inn is owned by Ernie Arthur aka Dr. Bonkers, who was a clown on a kids' tv show. Of course, Harley is a big fan and even sings the theme song. She asks to see him and the old desk clerk tells her that he is buried in the graveyard behind the inn. He shows them to their room and Harley immediately falls asleep. Zatanna opens the closet and there are clowns of various colors and sizes. The desk clerk is not what he seems and you know who shows up. The ending is hilarious and I would love to see Harley Quinn and Zatanna team up more in the future. The fourth story is titled

"Out of My Skin" and features Martian Manhunter. He investigates a swamp where a string of animals and a human were found skinned. It was nice to see him in his Detective Jones disguise. He finds an alien shapeshifter that was skinning the animals and human. The ending is a little depressing but the story is still worth reading.

The fifth story is titled "Dreamweaver" and features Justice League Dark. Bobo the Detective Chimp is the main character as he searches for his lost teammates. He finds out that he's in his worst nightmare but he wakes up and finds himself in the Oblivion Bar. Seated around the table are Swamp Thing, Wonder Woman, Zatanna and Man-Bat bound with purple tentacles. The real culprit of the nightmares turns out to be someone rather unexpected. A great story that makes me wonder why Bobo doesn't have his own series yet.

The sixth story is titled "House of the Dead" and is a Secrets of Sinister House original. A married couple and their daughter move into the creepy Drake Mansion. The little girl plays with her new unseen friend while her mom finds the history of the house on the Internet including the murderous dark priest that built the place. Of course, you find out who the little girl's unseen friend is and he asks her if she has any matches. The ending surprised me because it features one of my favorite dead man.

"Fear 101" is the seventh story featuring the Green Lanterns. Jessica and Baz are having breakfast together when they receive an alert to rescue starship survivors. He disappears early on the ship leaving her on her own. Of course, Jessica's fears mount while she searches the ship. Interesting story but it felt a little too short for me.

Finally, John Constantine is featured in the eighth and last story titled "Hell is for Dreamers". He is haunted by a dead actress that wants him to find the man that killed her. Unfortunately, the killer is also dead so she swears to haunt Constantine until she has her revenge. What he does makes Secrets of Sinister House 80-page Giant #1 worth getting.
Posted by Jamdin at 12:01 AM