I went to the local Dollar General to do some browsing earlier this afternoon and I was a little surprised that they had their shelves stocked with Valentine's Day merchandise already. I did pick up a few items that I will hopefully showcase in February. I also picked up the Hot Wheels HW City 2015 Batman Arkham Asylum Batmobile. This is a bit different than the Arkham Asylum Batmobile from Hot Wheels. The biggest difference is that this one has more of a matte black finish instead of the glossy black. The packaging is different too since this one belongs to the HW City series. The back of package is mostly devoted to the Hot Wheels Showdown scan & race game (there is a code to start the race but I have nothing to scan it with so it is pretty worthless to me). The bottom of the diecast car is black instead of chrome and has 2010 on it. The price was a whopping $1.30, which is still cheaper than their Hot Wheels Star Wars vehicles that are selling for five bucks. 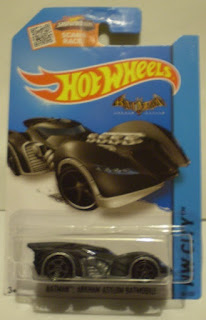 Here is a close up: